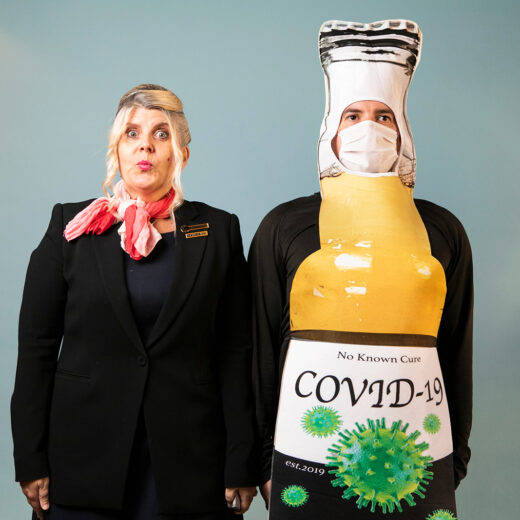 As I’m sure you all know, last week saw our Fresh ‘Coming Out’ party We were celebrating coming out of lockdown, and getting back to being able to enjoy that oh-so-important SOCIAL element of networking.

At the party we announced our Fresh Awards (more of that in a moment), launched our fabulous new podcast and above all celebrated getting social. In my many years of networking, I have found some people who just don’t get the importance of the social side of networking. ‘Networking is all about business’, they say, ‘not about fun, chit chat and socialising.’ I couldn’t disagree more, and here’s why…

Networking is all about building a community – a community of people who know, like and trust each other. Much of that happens in our meetings and our ‘Get Fresh’ one to ones. They do have a big personal element but are structured and more formal networking activities.

But the real know/like/trust magic happens when we get together in a less formal, more social environment. Whether that is our annual party for the whole Fresh community, a group chatting and bonding whilst creating hundreds of Fareshare meals, or a ‘Freshies and Frothies’ social drinks evening, it’s where we get to show our true selves, let the barriers down, maybe even share some vulnerabilities, and really and truly get to know each other. A relaxed environment allows people to feel safe, to open up more. In a social situation we show a different side of ourselves than when we’re round a meeting table. And that is what I mean by networking magic – it elevates our relationships from ‘colleague to friend’ and massively increases our propensity to refer to each other.
We’re all busy, I get that, and it’s very easy to say no to social events. But in Fresh, we’re all about ‘just say yes’, and reaping the rewards of that attitude. We have to ask ourselves ‘If I turn up, what great things could happen? Maybe I’ll have a laugh, and meet new people.’

Long-standing Fresh member Emily Potter ‘just said yes’ when there was an unfilled place at Fareshare, and she was asked if she could attend at short notice. Not only did she have a great evening, but she met someone who referred a $100k opportunity to her. That’s some reward for saying yes and making a few sausage rolls!

As any of you who’ve been to a Fresh party know, there’s always a theme and a dress-up. That’s a deliberate policy, to allow people to show their creativity, to bring them out of their shells, and above all to bond. I know that not everyone feels comfortable with it initially, but going with it is another example of ‘just saying yes’.

Our Fresh Awards at the party all went to people who ‘just say yes’ and who understand the importance of getting involved. Here’s three examples:

Shaun Resnik (Networker of the Year 2021) – when Shaun started with Fresh in our very early days, he didn’t know anyone, and his public speaking skills were a little shaky. But he came to every event, he took opportunities to speak, and he took time to listen and get to know people – in short, he said yes to every opportunity that networking offered him. He’s been a Fresh Advocate and worked with struggling hubs – not because he thinks he’ll get something back, but simply because he wants to help

Inbam Devadason (Fresh Advocate 2021) – he has been a member of Fresh Camberwell since it started. He’s always been first in line to get involved, including organising special events, and taking on the facilitator role when no-one else put up their hand. He could have said ‘I’m too busy’, but instead he said ‘yes’, and the whole hub is thriving because of his amazing leadership. By saying yes, he now has the right people in the hub, and Camberwell has growth, high visitor numbers, buzzing social events and is hub of the year.

Jo Fisher (Facilitator of the Year 2021) – as anyone who knows Jo would agree, her strengths are communication, empathy and positivity. But when she first joined Fresh, Jo was what I call a ‘Nervous Nellie’ – speaking was definitely not her thing, but her positivity meant that she was wired to always say yes, and take on every opportunity she could – that’s led her to become a facilitator, to be part of the membership team, a mentor, providing one to one training and education for other members. All of which have given Jo a massive shot of confidence.

Shaun, Inbam and Jo are great examples of saying yes for the right reasons. They’re not the ‘turn up to the opening of an envelope’ types, who are in it for themselves, or to be seen. They genuinely want to be actively involved to help others and to share their positivity.

So, the next time you are invited to Freshies and Frothies, Speed Networking, a Fresh party, Fareshare or any social catch up with other Fresh members, please don’t fall into the trap of thinking that socialising is a nice optional extra element of networking. You can only truly get to know, like and trust a person when you see their whole self – and that is why social events are just as important as business meetings when it comes to networking.